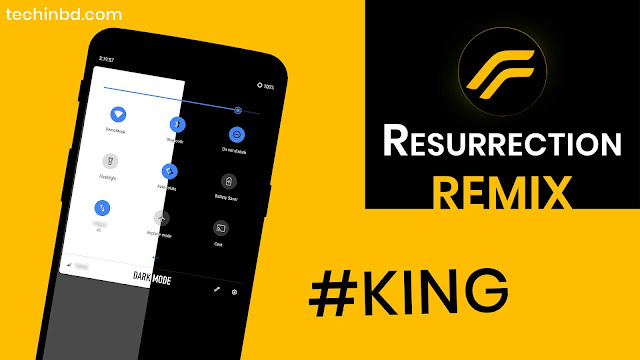 If you are an old custom rom user, I mean you already know about custom roms under the 2017-2018 then definitely you know about Resurrection Remix Name. It is a very popular custom Rom in before. But it was discontinued from 1 year ago for unknown reasons. No developer was working on this particular Rom.

But the good news is it's starting available from now. Recently it was published for Redmi k20 pro and the developer is working to make it available for all devices. I flashed this Rom on my Redmi k20 pro last night. Now I will write about the experience and a short overview of this particular Rom.

Note that It is an initial build of this Rom for Redmi k20 pro. That's why there are some m inor bugs also. But no worry, developers are working hard to fix all the bugs within a month. So, we can accept a bug less stable build of this rom in the next month. Good thing is it's an official Rom and we get every update through OTA. Never need to wipe everything before upgrading to a new one.

Overview of this Rom

First of all, This rom is based on the latest Android 10 operating system. The build date is 13th august 2020. Also this Rom does not include Google Apps. So you need to flash Google apps separately. Without GApps the Rom size is only 688 MB. Vendor of this rom is MIUI stock vendor and the kernel is also MIUI default Perf Kernel.

Do not flash micro GApps

I already share that this room doesn't include GApps. So, basically you should flash Gapps or Micro GApps. But there is a problem when I flash micro gapps. The Stock launchers of this room  totally crashed and also stopped working. But we can switch to another 3rd party launcher from the play store.

But if you want to use the stock prebuilt launcher which is Trebuchet Launcher then definitely flash the original google apps 64 bit version.

The stock camera on this Rom is the Cyanogenmod Camera. It is very common that we accept this camera from a AOSP based custom Rom. But to be honest this camera is not so good. Because you can't use the other 2 lenses which are telephoto and Ultrawide.

But as an alternative you can flash Anx Camera through any custom recovery or install the latest Google camera app from the official telegram group of your k20 pro. In the Anx Cam, all functionality is working as MIUI Roms camera. Like the 48 Megapixel camera mod, Portrait mood, Night scape mood, Super slow mo shoot, Extra 2 lenses. Also you can record up to 4K 30 or 60 FPS per second video.

Now talk about the bugs. First bug that I notice on the Fingerprint sensor. It is very missing all the time. It did not work when I turned on the DC Dimming mood. Sometimes the backlit of the fingerprint isn't showing. Also there are some very minor bugs which I should never write in detail. Keep in mind it is the first build of this Rom. After 2-3 updates I think all bugs are solved by the developers.

If you didn't like beta Roms with some bugs, then don't use or flash this one. No doubt it is the king of other custom Roms. But still it is not stable right now. I suggest you wait for some updates.